At Dissent, a provocative essay by Professor Michael Katz on the question of why the urban poor of Europe have been burning cars, while in America, the riotous urban revolutionary spirit of the '60s never resurged, even "as as the spread of black poverty turned vast areas of cities into reservations for the black poor." 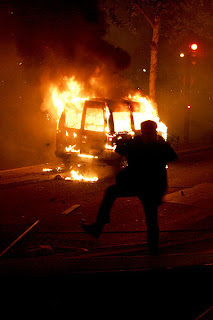 "African Americans’ entrance into the Consumers’ Republic is full of irony. Consumption demands—equal access to public accommodation, entertainment, shopping, and transportation—were key goals in the civil rights movement. They also helped precipitate the civil disorders of the 1960s. The national welfare rights movement made full membership in the Consumers’ Republic a major demand. But the Consumers’ Republic also undermined black protest by shifting the focus of black demands to public accommodation and market access, thereby linking African American goals to mainstream American aspirations and subordinating alternatives based on black nationalism or social democratic visions of economic justice. Among both black and white Americans consumption masked widening inequality, environmental degradation, and heightened insecurity with a blanket of inexpensive goods available to nearly everyone through the magic of credit. The result was consumer debt and bankruptcy that reached previously unimagined heights, rather than mobilization expressed through politics or other forms of collective action.

"By facilitating the rise of the Consumers’ Republic, the private sector developed an indirect mechanism for deflecting the potential for civil violence. Public authorities also deployed more direct mechanisms. In 1968, Congress passed the Omnibus Crime Control and Safe Streets Act, which created the Law Enforcement Assistance Administration (LEAA). The LEAA, according to one historian, “provided a law-and-order alternative to the social, cultural, and economic perspective of the Kerner Commission.” Operating mainly through block grants to states, the LEAA gave money to police forces and other parts of the criminal justice system. The legislation specified that no more than one-third of federal grants go to personnel—a requirement that excluded manpower-intensive programs, including those that focused on community relations and social service. But the police easily fulfilled the law’s mandate by purchasing hardware such as antiriot tools, helicopters, and vehicles. Thus, until its abolition in 1980, much LEAA money supplied technologies of repression and control."

For the perfect musical accompaniment, here's Jello Biafra and the Dead Kennedys performing "Riot" in 1984 (yes, I actually saw them on this tour).

Posted by Christopher Brown at 8:28 AM