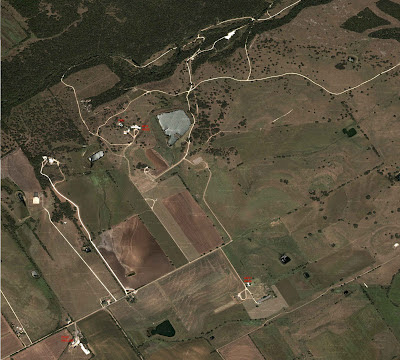 At NYRB, a fascinating transcript of a pre-war (Feb. 2003) private confab between W. and then-Spanish Prime Minister Jose Maria Aznar at the weekend white House in Crawford, along with an insightful annotation by Mark Danner. (Note that the text is a translation back from a Spanish translation published in El Pais, so some of nuestro jefe's idiomatic edge may have gotten lost in the process.)

Prime Minister Aznar: Is it true that there's a possibility of Saddam Hussein going into exile?

President Bush: Yes, that possibility exists. Even that he gets assassinated.

PMA: An exile with some guarantee?

PB: No guarantee. He's a thief, a terrorist, a war criminal. Compared to Saddam, Milosevic would be a Mother Teresa. When we go in, we'll uncover many more crimes and we'll take him to the International Court of Justice in The Hague. Saddam Hussein believes he's already gotten away. He thinks France and Germany have stopped holding him to his responsibilities. He also thinks that the protests of last week [Saturday, February 15] protect him. And he thinks I'm much weakened. But the people around him know that things are different. They know his future is in exile or in a coffin. That's why it's so important to keep the pressure on him. Gaddafi tells us indirectly that this is the only thing that can finish him. Saddam Hussein's sole strategy is to stall, stall, and stall.

PMA: In reality, the biggest success would be to win the game without firing a single shot while going into Baghdad.

PB: For me it would be the perfect solution. I don't want the war. I know what wars are like. I know the destruction and the death that comes with them. I am the one who has to comfort the mothers and the widows of the dead. Of course, for us that would be the best solution. Besides, it would save us $50 billion.

PMA: We need your help with our public opinion.

PB: We'll do everything we can. On Wednesday I'll talk about the situation in the Middle East, and propose a new peace framework that you know, and about the weapons of mass destruction, the benefits of a free society, and I'll place the history of Iraq in a wider context. Maybe that's of help to you.

PMA: What we are doing is a very profound change for Spain and the Spaniards. We're changing the politics that the country has followed over the last two hundred years.

PB: I am just as much guided by a historic sense of responsibility as you are. When some years from now History judges us, I don't want people to ask themselves why Bush, or Aznar, or Blair didn't face their responsibilities. In the end, what people want is to enjoy freedom. Not long ago, in Romania, I was reminded of the example of Ceaucescu: it took just one woman to call him a liar for the whole repressive system to come down. That's the unstoppable power of freedom. I am convinced that I'll get that resolution.

PMA: That would be the best.

PB: I made the decision to go to the Security Council. In spite of the disagreements within my administration, I told my people that we should work with our friends. It would be wonderful to have a second resolution.

PMA: The only thing that worries me about you is your optimism.

PB: I am an optimist, because I believe that I'm right. I'm at peace with myself. It's up to us to face a serious threat to peace. It annoys me to no end to contemplate the insensitivity of the Europeans toward the suffering Saddam Hussein inflicts on the Iraqis. Perhaps because he's dark, far away, and a Muslim, many Europeans think that everything is fine with him. I won't forget what [former NATO Secretary General, the Spaniard Javier] Solana once asked me: why we Americans think the Europeans are anti-Semites and incapable of facing their responsibilities. That defensive attitude is terrible. I have to admit that I have a splendid relationship with Kofi Annan.

PMA: He shares your ethical concerns.

PB: The more the Europeans attack me, the stronger I am in the United States.

I wish this were fiction.

He was having a little joke with this line, obviously. We all know the war is going to pay for itself once all those oil revenues start rolling in. That Dubya, always the kidder.