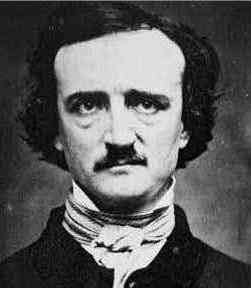 At the New York Observer, an interesting bit on the mystery of Edgar Allen Poe's rattling and perhaps tumorous gray matter:

'[T]he articles confirmed that Mr. Poe’s body had been exhumed, 26 years after his death, so that his coffin could be moved to a more prominent place at the front of the cemetery.

'More to the point, a few of the articles suggested that the great man’s brain had been visible to onlookers during the procedure.

'The first of these was an undated letter to the editor of The Baltimore Gazette, which claimed that “a medical gentleman” had seen “that the brain of the poet Poe, on the opening of his grave … was in an almost perfect state of preservation,” and that “the cerebral mass, as seen through the base of the skull, evidenced no signs of disintegration or decay, though, of course, it is somewhat diminished in size.”

'The second was an 1878 article in the St. Louis Republican, noting that “the sexton who attended to the removal of the poet’s body” had lifted the head during the exhumation and reported seeing the brain “[rattling] around inside just like a lump of mud.” The sexton reportedly thought that “the brain had dried and hardened in the skull.”'
Posted by Christopher Brown at 8:20 AM