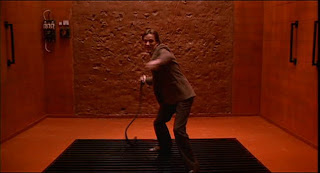 Via Ballardian, a great Washington Post interview with David Cronenberg that explores the director's prescient knack for spelunking the dark, not-so-subliminal intersections of sex and violence lurking in our mediascape:

<<<[I]n "Eastern Promises," Cronenberg emphasizes the onus of severing a human throat -- an idea that occurred to him after watching a terrorist beheading video. The would-be assassin in Cronenberg's movie is "not very experienced at this," he explains. He discovers the human body is "a complex thing with sinews, muscles and tendons. It resists destruction to the last drop of blood. So it's not a nice clean cut. It's messy and horrifying for him -- and us."

...Cronenberg says he has not watched the grisly "Saw" or "Hostel" films, which he describes as nothing more than "torture movies" -- a theme he explored in his 1983 film, "Videodrome," in which a sleazy cable television owner (James Woods) broadcasts a pirated video of torture and mutilation, only to discover the violence on it is not staged. Cronenberg's work is different, in that instead of shock for shock's value, he's using the form subversively against itself, to promote nonviolence.

...The filmmaker is "unafraid of intimacy with violence and sex," says Holly Hunter, who played one of the characters in "Crash." "He takes you on the inside track of it, which is nothing to do with slickness or glamour, and it can actually be quite blasphemous and macabre. . . . There's a coolness to David's movies -- cool in temperature, I mean -- and in that way, they're not pornographic or thrill-seeking."

Told of Hunter's comment, Cronenberg responds: "I think people are curious, drawn, attracted, repelled and afraid, all at the same time, about violence, and they're right. There's an eroticism involved, certainly in 'Crash,' and I really saw that in the beheading videos. They looked like homosexual gang rapes with all the chanting and so on. It was pretty obvious to me, though [the terrorists] would be in total denial about that. There are strange, perverse elements to violence.">>> 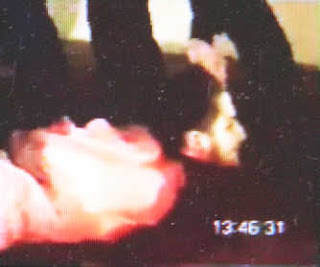 Pic: The auteur theory of the mujahideen hostage video? Still from the Alan Berg beheading (2004).

Eastern Promises is much more digestible fare than Videodrome or Crash, but a perfectly constructed thriller with subtle, lingering power. Now, imagine Cronenberg marrying these two threads of his work to explore the dark territories of the GWOT...
Posted by Christopher Brown at 8:40 AM