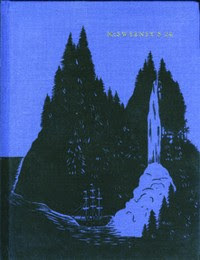 The new McSweeney's 24 smells like cordite, having been assembled while fighting off the hordes of Comanches attacking the city. Perfect reading for that bar in Tenerife.

Having spent a good bit of time this year pondering what a proper Blackwater-infused slipstream might look like, imagine my pleasure at opening this placid blue cover and having it explode in my face like a surprise present from the Unabomber of the subconscious, with this perfect story by soldier/author Christopher Howard, "How to Make Millions in the Oil Market," a hyper-kinetic daydream that reads like Tom Bissell covering Generation Kill:

"They took a corner and a white Nissan pickup backed in front of them and stalled. The middle-aged Iraqi inside swatted the steering wheel in frustration.

Not another one of these idiots, Gerrera said. He braked. He considered the pickup and shook his head. What folly these primitives be up to. He'd give the pickup a few moments to restart before backing up and pulling around. Traffic had grown geometrically worse over the months since the official war ended.

You know what this place reminds me of, Duane? Gerrera said. That desert planet in that Star Wars movie of yours. Tattoo.

Tattooine, Wilson corrected him. Come correct or don't come at all.

He remembered watching the trilogy over three consecutive nights with Dana after the girls had been put to bed.

The smoke trail of an RPG lanced across the hood.

The driver's side window disappeared. Gerrera jammed his hand against his neck like slapping a mosquito. He stomped the accelerator. Wilson heard someone firing full-auto bursts, but the scenery was a blur. The Land Rover surged, smashing the corner of the pickup, sending it spinning. They teetered drunkenly as Gerrera lost control. The hood crumpled against ancient brick. Rainbow-shimmering CDs exploded across the interior.

There was a deep stillness as if the whole world was stunned.

A rifle bullet came through the windshield cleanly and slapped Gerrera's skull."

The other stories in the first half of the issue all share some kind of repurposing of men's adventure tropes, and the three I've read thus far are beautiful. The other half (literally, due to some ingenious kind of double binding) is devoted to the very worthy task of rectifying the insufficient attention given to Donald Barthelme.

The editorial note explains that the issue number -- 24 -- got them thinking of Kiefer Sutherland from their perch over Valencia Street "...and then all yelling 'Ah-ha!' at once and tumbling down, thousands of feet, executing perfect tuck-dives into pools of bright clear water?"

I anxiously await the upcoming Wholphin, which I am told will bookend this issue's Russian "Married with Children" with a lost episode of "24" ghost-written by Barthelme's ghost.

Go buy one now while supplies last!
Posted by Christopher Brown at 9:47 PM